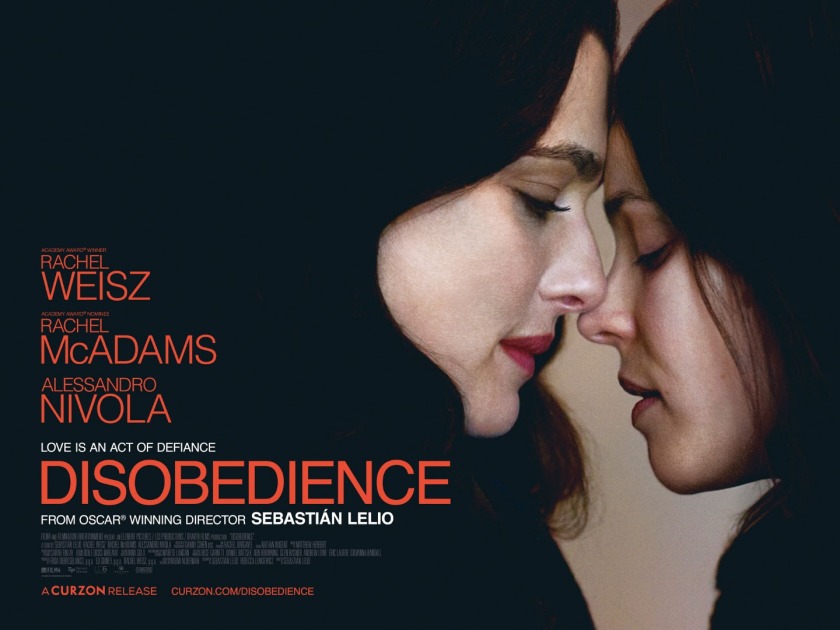 Sebastián Lelio’s Disobedience moves with the force and determination of a slow-moving train gradually picking up speed.  The film starts out in a London synagogue with an Orthodox Jewish rabbi named Rav Krushka (Anton Lesser) talking about the beauty of what makes us different from all other beings on the planet is our ability to choose.  We can follow the norms of our society or we can choose to be disobedient. We are introduced to his daughter Ronit (Rachel Weisz) who is living a world away in New York when she gets a call that her father has died of pneumonia. The contrast between the two scenes couldn’t be starker.  In the first the room is dominated by old, bearded men with almost their entire body covered in cloth and then we’re in an open studio where a woman is photographing a shirtless old man covered in tattoos. Both opening scenes are simple and beautiful. Though the film is about a repressed society, the characters are presented honestly and fairly, despite some of them being quite rigid in their views, and throughout the film Lelio is careful not to pass judgement on his characters.

Ronit travels back to London and the relationships between the characters are slowly revealed to the audience.  She reconnects with Dovid (Alessandro Nivola) who was Rav’s disciple and heir. When Ronit and Dovid see each other after so many years, at first they appear to be siblings because of their familial bond, but over time we discover they were best friends as kids, with another girl named Esti (Rachel McAdams).  Esti and Dovid are now married and she appears hostile at Ronit’s return but this initial reaction is not exactly as it seems. Lelio unravels the intimate bonds that exist between the characters and their complicated history.  To give a more detailed plot summary of the film would be an injustice to the nuanced way that Lelio, his screenwriting collaborator Rebecca Lenkiewicz and editor Nathan Nugent lay out the story and its intricacies.

Lelio’s films showcase women who are defiantly pushing against the arbitrary and fluid societal boundaries that exist in their community.  Lelio’s last film, A Fantastic Woman (Oscar winner for Best Foreign Language Film) was about a trans woman who suffers the abuse and humiliations of her deceased partner’s family after his sudden death.  There is a scene where she is literally walking against the powerful wind that almost knocks her over and her body is nearly at a 45 degree angle struggling to stay up. The imagery in Disobedience isn’t as overdone and the elders in their community are more passively-aggressive but the push against that culture’s norms are just as powerful.

The film takes the event of the death of a patriarch to examine the relationships of the three individuals at its core.  Though the film is set in a very narrow environment, the themes it explores are universal – that of the burdens of those who stay and those who leave.  To that end, the three leads are terrific with Rachel McAdams standing out. Her performance is measured and powerful, continuing the fine work she’s done in other recent films like Spotlight.  Weisz manages to show the pain of someone who had the courage to leave her home and the strictures of her society but now lives permanently on the outside from her friends and family.  Nivola resists the urge to make his character oppressive despite trying to maintain the patriarchal restrictions of his community. The film slowly builds tension throughout and the ending is one that is surprising, touching and resonant.